The difference between globe valve and gate valve

Globe valves and gate valves are the two types of valves used in many pipelines, they have many similarities in materials and appearance, sometimes people confuse the two types because of the shape. quite similar of some gate valve lines with globe valves. We would like to point out the differences so that readers can easily distinguish. 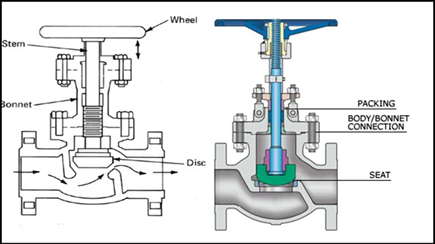 – Globe valve: has a horizontal valve disc structure, a saddle-shaped body or a falling letter, so it is also known as a falling valve

– Gate valve: valve disc structure is a form of vertical wedges such as a door or gate, the opening and closing will be faster than the globe valve.

– The outer valve is used to close – open the fluid, it also has the effect of regulating the solvent in the pipe as you like.

3- The flow of the medium

– Globe valves have a fluid flow in a certain direction and are clearly specified on the valve body. It has 3-5 times more flow resistance than gate valve.

– Gate valves – gate valves flow in both directions without necessarily having to be set in either direction. In addition, it has a very low flow resistance coefficient from 0.08 – 0.12

What we are interested in is the price of the two valves. Globe valves are always priced higher than gate valves, gate valves are the second cheapest after the butterfly valve.

Difference Between Full Bore and Reduce Bore Ball Valves
What is a angle seat valve
What is a Solenoid valve? Structure and Application
Difference between Ductile cast iron and cast iron
DIFFERENCE BETWEEN COPPER, BRASS AND BRONZE
error: Content is protected !!